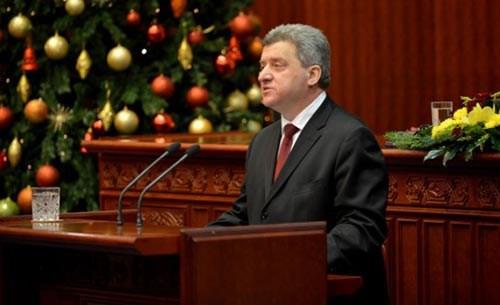 The law on languages, the way it was written, and the way it was adopted in parliament, will fully block the work of the institutions. Almost all Articles in the Law violate the Constitution. The law was approved by parliament in apparent breach of prescribed procedure, President Gjorgje Ivanov said on Friday, in his annual address at the parliament.

“The legal deadline was not met, the European flag was abused, there was no consultation with the Venice Commission. I returned the law to parliament given the shortcomings, I didn’t sign it. I raised a series of objections, but parliamentary majority ignored them, it also ignored the opinion of experts and opposition parties,” Ivanov said in his year-end speech.

Expressing respect for Albanian, Turkish, Serbian, Vlach, Romani and Bosniak people, Ivanov stressed that the Macedonian language is a communication code and a cohesive factor connecting all segments of Macedonian multi-ethnic, multi-religious and multi-language society.

If the anti-constitutional law on use of languages comes into effect, the Macedonian will no longer be lingua franca uniting the Macedonian society, Ivanov said.

Mijalkov subject to random checks by police while on house arrest