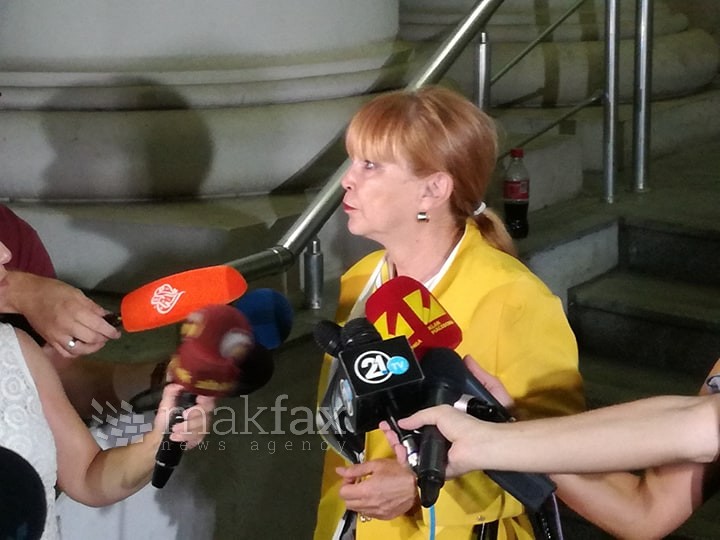 Few hours after a court in Skopje ordered a 30-day detention of SJO chief Katica Janeva, prosecutor Vilma Ruskovska said she didn’t ask the court to remand Janeva in custody because she didn’t have enough evidence to charge her.

The outgoing head of the Special Prosecutor’s Office (SJO) initially was not a suspect in the high-profile extortion case, codenamed ‘Racket’ as there were no evidence indicating involvement, Ruskovska said. “If I had enough evidence that someone committed offence, they would have been taken in police custody,” she added.

“I didn’t ask the court to remand Janeva in custody. I deemed that my colleague should be given a chance to express her point of view, and that’s the reason I did not seek detention. The case is very much exposed in public. I just wanted to hear what she has to say as a witness. I would not require detention without sufficient evidence,” Ruskovska said after Janeva was brought to court for questioning by examining magistrate, a pre-trial investigation judge.

On Wednesday, police raided Janeva’s home and detained her as part of widening investigation into high-profile extortion ring. The authorities sought detention of the special prosecutor and head of SJO after she was named as a suspect in a high-profile corruption scandal.

Prosecutor Katica Janeva was formally accused Wednesday of abusing her authority and gaining substantial benefit in form of property. She had allegedly dropped corruption charges against a local businessman in exchange for payment.

Janeva’s office – the Special Prosecutor’s Office or SJO – was set up 2015 as part of a crackdown on organized crime and corruption. SJO’s task is to investigate and prosecute criminal offences related to and arising from content of the illegally intercepted communication.