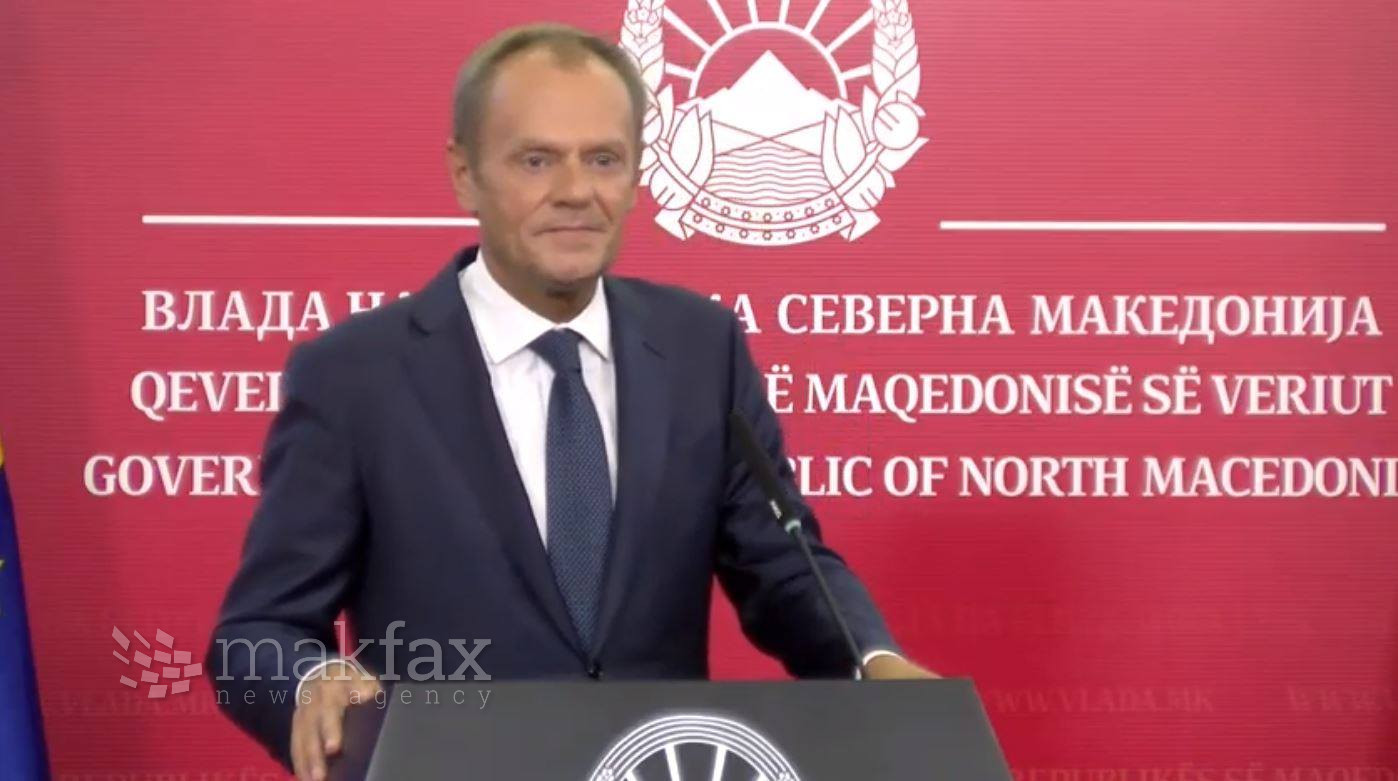 President of European Council Donald Tusk, after his meeting with Prime Minister Zoran Zaev, praised North Macedonia’s efforts over the past years as remarkable.

“Your country’s efforts over the past years have been remarkable. Together we have withstood one of the biggest migration crises that Europe has faced since the Second World War. It was for all of us a very difficult and demanding test of responsibility and effectiveness of action. Your country passed this test better than many EU Member States. You have also found a solution to the dramatic political crisis in your country. A solution based on democratic principles, decency and common sense. And through your Friendship Treaty with Bulgaria and the Prespa Agreement with Greece, you have become champions of political rationalism and political maturity in your region. These achievements are truly impressive, internationally recognised and should not be wasted by the EU,” Tusk said.

“When the EU leaders met in June, three months ago, they committed to deliver a “clear and substantive” decision – in October – on whether to open accession talks with you and your neighbour, Albania”.

“I expressed my personal views clearly back in June: your country, within the last two years, has done everything that was expected of you for the EU to be able to launch the negotiations in line with the European Commission’s recommendation. That continues to be my strong conviction. Your country has done everything,” EU Council president said after his meeting with the prime minister.

“That is also why I came to North Macedonia today. I wish to make it crystal clear: there is no doubt in Brussels about your political commitment to the rule of law and to fighting corruption. Of course, anybody can at anytime and anywhere do more, especially when it comes to implementation. But we know very well that your government is determined and consistent in this, also as regards the continuation of the work of the Special Prosecutor’s Office.

“Finally, allow me one metaphor. The EU accession process resembles a marathon more than a 100 metres sprint. And as a dedicated runner, I know what I am talking about. To reach the finish line, continued strength, endurance and focus is needed. And sometimes, I should also say, patience. I have no doubt that North Macedonia possesses more than enough of all these qualities. And everyone should appreciate it.”

Skopje is the best possible place where I would like to appeal to the leaders of the European Union: Now you do your share. Because North Macedonia has already done its share,” Tusk told  a press conference.