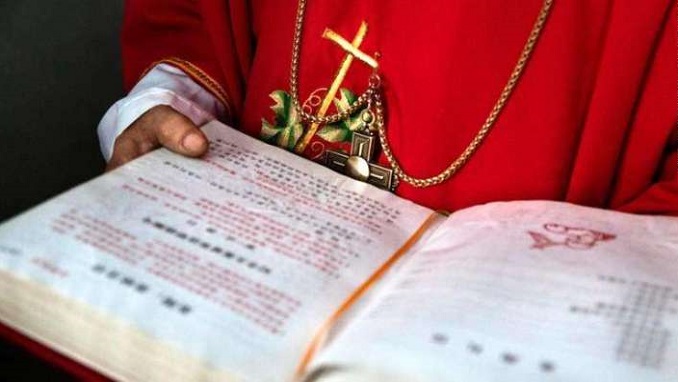 The Chinese government is planning to incorporate Buddhist and Confucian teachings into a new translation of the Bible, according to a Christian human rights activist based in the United States, Buddhist Door reports.

In a statement to Congress, Reverend Bob Fu, founder of the human rights watchdog organization China Aid, said on 27 September that under a five-year plan drawn up to give the Chinese government more control over the growth and influence of Christianity in China, state-sanctioned Protestant bodies the Three Self Patriotic Movement (TSPM) and the Chinese Christian Council (CCC) aim to promote “the Sinicization of Christianity.”

The plan, finalized in March, will be supervised by the State Administration for Religious Affairs according to Rev. Fu:

“Every province, autonomous region, and municipality’s TSPM and CCC seminaries and churches will cooperate with it. The plan made it clear that ‘Sinicization of Christianity’ means to change ‘Christianity in China’ into ‘Chinese Christianity,’” Rev. Fu told members of the House Foreign Affairs’ Subcommittee on Africa, Global Health, Global Human Rights, and International Organizations. “[The plan] emphasized that ‘the heart and soul of Christianity’s Sinicization is to Sincize the Christian theology,’ and even proposing to ‘re-translate the Bible or re-write biblical commentaries.’”

Rev. Fu is a former house church leader who immigrated to the United States from China in 1997.

The Chinese government plans to “retranslate” the Old Testament with some Buddhist scripture and Confucian teachings and new commentary for the New Testament, Rev. Fu explained in his written testimony.

“There are outlines that the new Bible should not look Westernized and [should look] Chinese and reflect Chinese ethics of Confucianism and socialism,” he said. “The Old Testament will be messed up. The New Testament will have new commentaries to interpret it.”

Rev. Fu noted that new regulations enacted in February require all religious activity to be conducted under “the guidance, supervision, and inspection of relevant departments of the local people’s government regarding the management of personnel, finances, assets, accounting, security, fire protection, protection of relics, health and disease prevent and so forth.”

State officials have called on some 20,000 underground house churches to close and join the state-sanctioned church, said Rev. Fu, adding that leaders of these churches must pledge their loyalty to the Communist Party.

Amid widespread moves to bring religious activity in China under tighter state regulation, all five officially recognized religions—Buddhism, Catholicism, Daoism, Islam, and Protestantism—have come under increased state scrutiny and interference, with efforts being made to discourage “Western” and “chaotic” thinking and ideas deemed harmful to social harmony, and to “re-educate” ethnic minorities to become more “Sinicized,” as President Xi Jinping seeks to cement party loyalty at the grassroots level.

“Religious freedom in China has really reached to the worst level that has not been seen since the beginning of the Cultural Revolution by Chairman Mao [Zedong] in the 1960s,” said Rev. Fu. (The Christian Post)

According to data for 2014 from a survey by the China Family Panel Studies under Peking University, 73.6 per cent of the population are classified as either non-religious or practicing Chinese folk religions—including local cults to deities and ancestors, Confucianism, Taoism, and Chinese Buddhism. Officially sanctioned Buddhism accounts for 15.9 per cent, other religions (including folk salvationism and Taoism) account for 7.6 per cent, Christianity accounts for 2.53 per cent, and Islam 0.5 per cent.

Among the many difficulties surrounding sourcing reliable data about religion in China is that many Han Chinese do not classify their spiritual beliefs and practices as “religious,” and often do not adhere exclusively to a single spiritual practice or tradition.

ComicCon Wraps up in Moscow with Perspective of Asia Deals