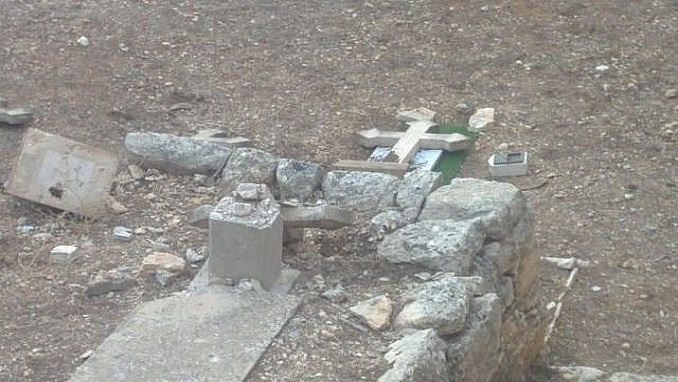 Police opened an investigation into an apparent hate crime at a Christian cemetery belonging to the Beit Jamal Monastery in Beit Shemesh where some 30 cross headstones were found vandalized, International Christian Concern reports.

According to a statement by the Assembly of the Catholic Ordinaries of the Holy Land, monks at the Salesian Monastery at Beit Jamal in Israel discovered on October 16th that their cemetery had been vandalized. Twenty-eight graves were reportedly destroyed, which included broken crosses.

The Tag Meir anti-racism group released a statement condemning “with disgust the desecration of the Christian cemetery,” saying it joined a string of other apparent hate crimes targeting Palestinians in the West Bank. The NGO called on police to complete their investigations into the matters swiftly.

This is not the first time that this site has experienced destruction.

In September 2017, vandals ransacked Beit Jamal, smashing a statue of the Virgin Mary, damaging furniture and breaking a number of the stained-glass windows inside the sanctuary. In January 2016, dozens of crosses at Beit Jamal’s cemetery were toppled, in the midst of a wave of attacks against Palestinians and Arab Israelis along with their property that were believed to have been carried out by Jewish extremists. In 2013, suspected Jewish extremists firebombed Beit Jamal and scrawled the phrases “price tag,” “death to the Gentiles,” and “revenge” on the hallways of the monastery.

No arrests were made in any of the cases.

The monastery, situated next to the town of Beit Shemesh some 20 miles (32 kilometers) west of Jerusalem, is known for its good relations with Israelis, who visit to buy its hand-crafted ceramics, honey and olive oil. It is widely believed that this monastery was once the tomb of Stephen, the first martyr of Christianity.

According to various media sources, an estimated fifty acts of vandalism has occurred on Christian holy sites in Israel within the past six years.