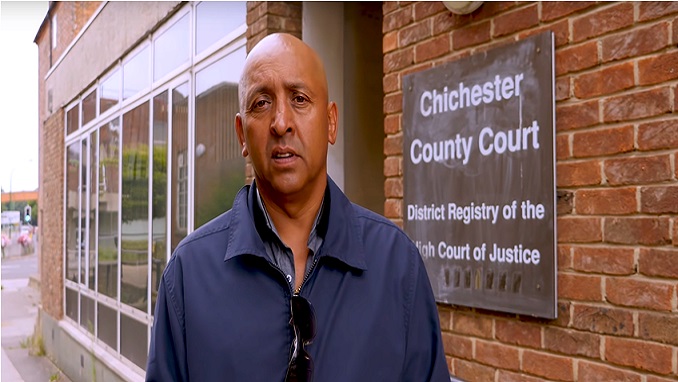 If you think Christians are not being persecuted in the UK, you need to read on. Steve Loha sold watches and mobile phone cases for 15 years at his stall at Chichester market. As a Christian, he would sometimes also give tracts to customers, using his opportunities to share the good news about Jesus with those he met.

But in May 2017, after a customer complained about one of the tracts, Steve’s licence was revoked with immediate effect, meaning that he could no longer trade at the market. With the help of the Christian Legal Centre, Steve challenged the decision and on Friday 20th July, a county court judge ruled in Steve’s favour, saying that his removal was illegal. He told the court that his criminal career began in his teens after “a series of family tragedies brought me to despair”. While in Winchester prison, he was invited to attend chapel by a fellow inmate and found himself drawn to Christ.

Becoming a Christian turned his life around. He abandoned his criminal lifestyle and began a new life as an honest small businessman and evangelist. He started trading two days a week at Chichester market, selling watches, mobile phone cases and other accessories. He built up a regular clientele of local customers and would sometimes enter into conversations, sharing his conversion experience or offering a tract:

“People were asking me for more tracts, and I had opportunities to give tracts out, so they can read the literature, and come back and ask me questions about it.”

All of that was lost in May 2017, when a customer who worked for the local council made a complaint about the content of a tract to the market manager – who in turn told Steve that his licence had been revoked with immediate effect. The next day, Steve attempted to reconcile with the manager and with the customer who complained by offering an “unreserved” apology for any offence caused by the tract. But the manager replied five days later to say that he would not change his decision. He said “the literature was extremely homophobic and unacceptable. In today’s world religious oppression, fanaticism and persecution is rife. Anything that supports or encourages them must be eradicated.”

You may be wondering exactly what was offensive about the tract that Steve gave to the customer.

The tract in question, published by Chick Publications in the U.S., was on the topic of homosexuality. It portrays the need for all people to turn from their sins and find forgiveness in Christ – focusing particularly on homosexuality and some of its consequences. The message is undoubtedly stark as it challenges both the practice of and the ideology behind homosexuality. It is not particularly comfortable to read. But the fundamental message of the tract is true – the events portrayed can and do happen, and there is a need, just like with any other sin, to turn to God in repentance and faith for salvation.

Steve, knowing his own background and the need for all people to be forgiven, gave out tracts to make known the hope of salvation in Christ. But one of the many people who received tracts from Steve made a complaint, and Steve’s livelihood was at stake. It wasn’t just his reputation and clientele that Steve lost. The company which runs the market, Bray Associates, runs most of the market places in this part of England – meaning that it wasn’t simple to set up shop somewhere else.

Steve got in touch with the Christian Legal Centre and asked for help. Generous donations from supporters meant that we were in a position to help him, taking the management company to court for breach of contract. We give thanks to God that on Friday, the judge ruled in Steve’s favour, awarding damages. But the case isn’t over yet – the management company’s legal representatives are applying for permission to appeal the ruling. Andrea Williams, chief executive of the Christian Legal Centre, commented:

“This decision makes a welcome change from a worrying trend we have seen in many recent judgments which sought to justify removal of Christians from their jobs and livelihoods for purely ideological reasons. In this case, however, the judge had the courage to uphold the rule of law. Steve Loha stands for some of the most precious things in humanity – honest hard-working enterprise, courageous evangelism, and genuine repentance of sin. He deserved justice, and we are very privileged to have served him in securing its triumph.”

“I would never have got this far if it wasn’t for CLC. They helped as a family to do what was right. They felt it in their hearts to support me and I pray God blesses them amazingly, and abundantly, for the work they are doing – to stand up, to give an account, to help Christians as a family.”

President Trump Says He Would Talk to Iranian Leader Without Preconditions

‘You Cannot Take Jesus Away From Us’: Iranian Christians Testify About Being Imprisoned for Christ