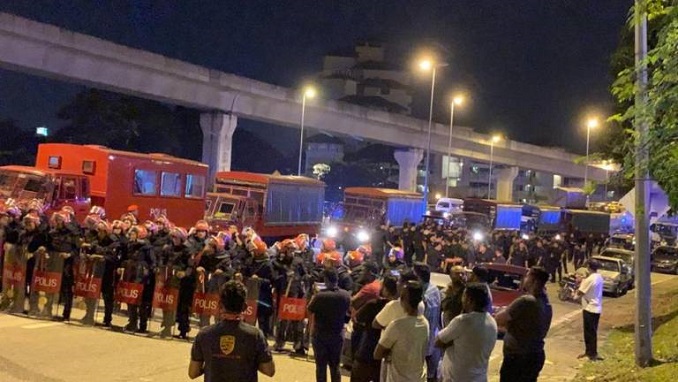 Clashes broke out among Hindus over the fate of the Seafield temple Sri Maha Mariamman Temple in Subang Jaya, Selangor, Asia News reports. The row saw people beat and hurl insults at each other with cars torched.

Tensions between the two factions were made worse by the intervention of 50 Malay Muslims sent to seize the temple. Following its intervention, police arrested 21 people, Malaysia’s Home Affairs Minister Muhyiddin Yassin said today.

Built over a century ago, the temple is at the centre of a dispute over ownership. The case has pitted the temple administration and One City Development, a real estate company. In 2014, the Shah Alam High Court ruled that the real estate developer was the legal owner of the land. However, the eviction order that followed has not yet been carried out because one faction in the Hindu community reject the ruling, whilst another accepts it. After some failed negotiations, the company tried to take over the temple on 22 November, but had to give up due to presence of protesters at the site.

One City Development then turned to police to evict protesters at 7 am Monday. When agents arrived, they found that the company’s lawyers had paid 150,000 ringgits (US$ 35,500) to 50 Muslim men to seize the temple ahead of time.

What is more, the latter’s arrival had led to a confrontation with Hindu devotees, which turned into clashes that saw 18 cars and two motorcycles torched. A police patrol car was also damaged by stones and windows were broken at a nearby shopping mall.

Some 700 agents were deployed, including members of the Federal Reserve Unit (FRU), a riot control force and special response team. As a result of the incident, the authorities arrested of 19 people and two lawyers representing One City Development. For its part, the company has rejected the version of events presented by the minister.

Putin Says Russia and China Working Together to Ditch Dollar