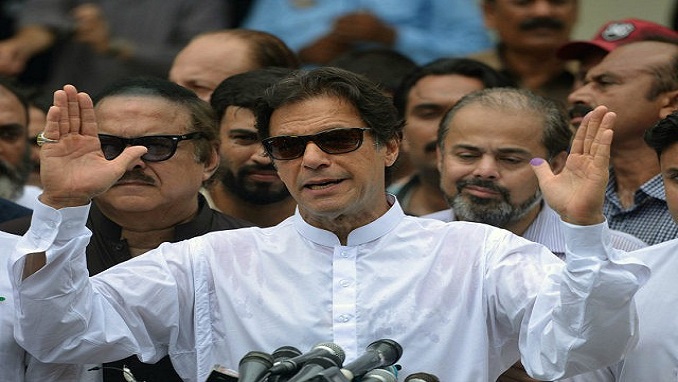 Christian watchdog groups have voiced concern over last week’s election of former cricket star and Islamist Imran Khan as Pakistani Premier, noting Khan’s public support for the nation’s harsh blasphemy laws, Breitbart reports. Shortly after the election, Khan—who attributed his victory to the will of Allah—told the nation that his preferred form of government is “the Islamic State as established by the Prophet Mohammad in Medina.”

“Today in front of you, in front of the people of Pakistan, I pledge I will run Pakistan in such a way as it has never before been run,” he said.

On Friday, officials announced that Khan’s Pakistan Tehreek-e-Insaf (PTI) party had won 114 of the 269 seats being contested in the National Assembly. Open Doors, which monitors Christian persecution around the world, said that everything suggests that Khan will be no friend to religious freedom, noting that “he seems keen to ensure that Pakistan remains a strongly Islamic republic.”

“Many Christians fear Imran Khan as the country’s leader as he has said he wants to return to jirga, a traditional assembly of leaders that make decisions by consensus and according to the teachings of Pashtunwali – a series of non-written ethical codes which predate modern laws and which prove a dangerous mix in combination with Sharia, the strict Islamic law.”

Khan has voiced support for Pakistan’s blasphemy laws, saying he understands that the laws are an “inconvenience” for some people. “But it is a law that is complete and I support it,” he reportedly said.

Pakistan has some of the most severe blasphemy laws in the world, prescribing the death penalty for the crime of insulting the Prophet Muhammad and life imprisonment for offending the ‎Koran, Islam holy book. The blasphemy laws are an extremely sensitive issue in the predominantly Muslim nation where Christians make up less than two percent of the population.

In June, Pakistani Christian Asia Bibi completed her ninth year of imprisonment for her faith after being arrested for blasphemy in 2009 and sentenced to death by hanging in 2010. Pakistani police arrested Bibi on charges of blasphemy after Muslim women backed up by an Imam complained that she had insulted the prophet Muhammad. Bibi had been harvesting berries in a field with a group of Muslim women who grew angry with her for drinking out of the same metal water bowl as them, insisting that as a Christian she was unclean.

“The United States has foolishly given Pakistan more than 33 billion dollars in aid over the last 15 years, and they have given us nothing but lies & deceit, thinking of our leaders as fools. They give safe haven to the terrorists we hunt in Afghanistan, with little help. No more!” he tweeted on New Year’s Day.

Not long after, the U.S. State Department announced it would add Pakistan to its Special Watch List as a “Country of Particular Concern” for severe religious freedom violations, citing the egregious abuse of Christians, Hindus, Ahmadi Muslims, and other minorities in the country. Pakistan was placed on the List for “severe violations,” suggesting evidence that religious minorities are significantly more threatened in that country.

Pakistan is an Islamic republic whose constitution requires all laws to be in conformity with the Sharia, or Islamic law. The nation’s penal code prohibits Ahmadi Muslims from identifying as Muslim and using Islamic greetings, as well as banning the “defiling” of the Quran and words that can be interpreted as “blasphemy” against Islam.

‘You Cannot Take Jesus Away From Us’: Iranian Christians Testify About Being Imprisoned for Christ