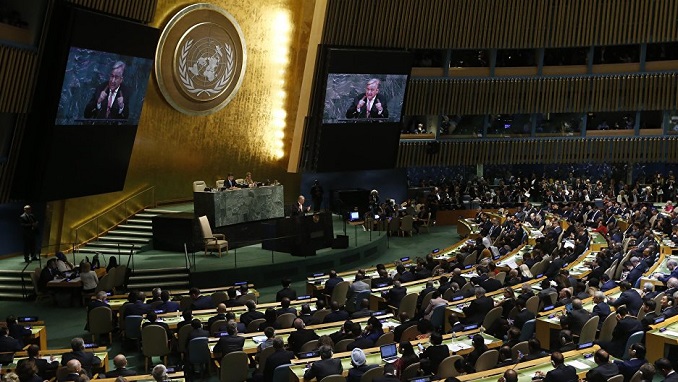 Namely, Palestinian diplomat Riyad Mansour was selected by the Group of 77 to be the 2019 chairman of the block, a move which some experts expect will trigger a backlash from the United States.

Mansour’s formal election is scheduled to take place in mid-September, and experts add that the U.S. may retaliate by reducing funding for UN agencies. Emily Hawthorne, Middle East and North Africa analyst at Stratfor, believes that the United States will maintain that the UN is an institution that often sides with Palestine in the Arab-Israeli conflict.

Her warning follows an announcement earlier this year by the Trump administration that it would slash its funding to the United Nations Relief and Works Agency for Palestine Refugees (UNRWA) by over $300 million, reducing it to $60 million.

The reason, President Donald Trump said, was the Palestinians unwillingness to “talk peace.”

“We have taken Jerusalem, the toughest part of the negotiation, off the table, but Israel, for that, would have had to pay more. But with the Palestinians no longer willing to talk peace, why should we make any of these massive future payments to them?” President Trump wrote on Twitter back in January.

The cut has resulted in a reduced number of jobs in Gaza and the West Bank, the UNRWA said last week. That decision led to protests in Gaza, with observers saying that about 1,000 people in the territory could lose their jobs, only increasing the already high unemployment rate there.

According to Hawthorne, the U.S. could decide to cut funding for UN agencies as it cannot influence, nor reverse the G-77’s decision. The United States is the international organization’s “wealthiest and most important member,” she added.

However, even with retaliation from the U.S. and backlash from Israel, Palestinian leadership of the G-77 will amplify the voice of Palestinians, who see the peace negotiations with Israel “as not moving in their favor,” Hawthorne further said.