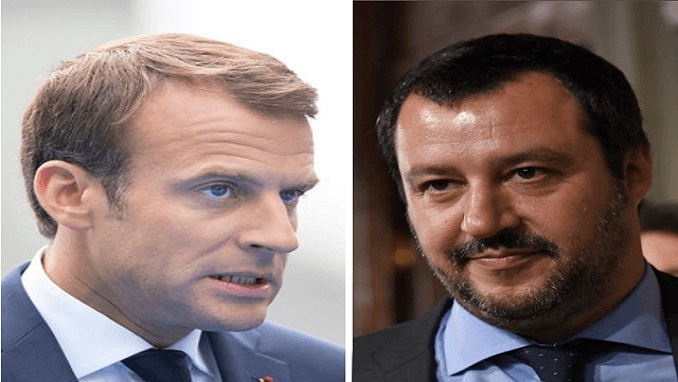 Emmanuel Macron has vowed a globalist bloc determined to impose a progressive EU superstate on the continent will defeat “extremist” pro-national sovereignty conservatives at European Parliament elections next year.

Declaring that the world is at a “moment of great transformations”, the French President outlined his vision for a “European sovereignty” in which Brussels would have autonomy comparable to that of China or the United States of America. Europe must become “the model for a humanist refoundation of globalisation”, he told the annual French ambassadors’ conference Monday, vowing to “redouble efforts” against patriotic conservative parties in the face of a world “where nationalisms have reawakened”.

The European Commission has backed Emmanuel Macron’s call for sanctions on EU nations refusing to resettle third world migrants. The former banker singled out Italian Interior Minister Matteo Salvini and Hungarian Prime Minister Viktor Orbán in his speech, pronouncing the latter a hypocrite for receiving EU funding while “making great speeches about Christianity” — which Macron said were “anti-European”. In a dismissal of the two figures’ position that mass migration from the world’s poorest and most violent nations poses a threat to the continent’s safety, Macron claimed Europe’s existence rests on the bloc’s embrace of NGOs, the mainstream media, campaigners, and so-called human rights.

“Our security depends on the reaffirmation of our values, human rights which are at the very foundation, not only of the Council of Europe, but of the European Union, and the defence of all those who represent them every day — I think of non-governmental organisations, intellectuals, artists, activists, journalists,” he said.

Echoing his rhetoric from an earlier speech in which he hinted hundreds of millions of migrants will be flooding Europe “for many years to come” —  with “bombshell” African population growth causing an “unprecedented” age of mass migration for EU nations, the liberal premier said Brussels’ role in the world is to “propose a new collective organisation” against the backdrop of a “great demographic transformation”, especially in Africa and the West.

“Every day I listen to people saying ‘do not accept [illegal immigrants], do not welcome them, it is weakness to show goodwill’”, Macron complained, asserting that the continuing arrival of hundreds of thousands of third world migrants to Europe’s shores in boats is no longer a crisis, because the numbers are not as large as they were in 2015.

Continuing on from the apparent swipe at leaders of the Visegrád nations, who argue the EU’s current approach of accepting all newcomers just encourages illegal migration, the French leader stressed that “the right to asylum is in our constitution … it is enshrined in all of our European texts”.

Emmanuel Macron has demanded closer and faster EU integration towards a superstate, in a speech where he vowed to “yield nothing” to conservative eastern states which believe in a Europe of strong… Stating a need to “build a migration policy with Africa … at a European level” Macron warned that “those who are entitled to asylum must be accepted unconditionally” by every country within the bloc. The president’s speech at the Élysée Palace came a day after Salvini blasted the EU project as “unprecedented filth that doesn’t deserve our money” as other countries’ leaders insisted Italy keep its ports open for boats of migrants without taking a share themselves.

“The European Union has decided to turn its back on Italy once again,” Deputy Prime Minister Luigi Di Maio said, as the country was locked in a row with Brussels over the fate of 150 migrants who remained docked for five days in Sicily.

“They want the €20 billion paid by Italian citizens? Then let them demonstrate that they deserve it and that they are taking charge of a problem that we can no longer face alone. The borders of Italy are the borders of Europe,” he added.

Italians Overestimate Immigrant Population More than Any Other Europeans