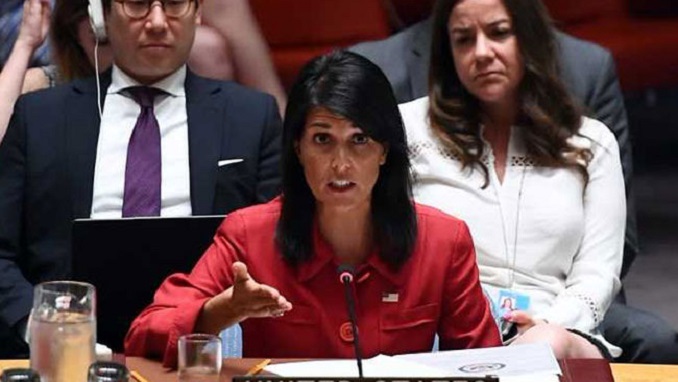 U.S. ambassador to the United Nations Nikki Haley condemned the Myanmar government on Monday over its conviction of two Reuters journalists, saying the move was yet “another terrible stain” on the country.

“It is clear to all that the Burmese military has committed vast atrocities,” Haley said in a statement posted to Twitter. “In a free country, it is the duty of a responsible press to keep people informed and hold leaders accountable.”

She further noted that the UN would continue to call for the journalists’ “immediate and unconditional release.”

Haley’s remarks followed the sentencing Monday of two Reuters journalist to seven year’s of prison by a Myanmar judge. The judge had ruled that Wa Lone, 32, and Kyaw Soe Oo, 28, who reported on the persecution of Rohingya Muslims, broke the law by obtaining confidential documents, The Hill reports.

Lone and Soe Oo, who have been jailed for over eight months, were convicted of breaking the Official Secrets Act. They testified that police officials provided them the documents at a restaurant in the city of Yangon, which according to a police witness was a trap, as the two men were arrested only moments later. Both reporters pleaded not guilty.

“Today is a sad day for Myanmar, Reuters journalists Wa Lone and Kyaw Soe Oo, and the press everywhere,” Reuters editor-in-chief Stephen Adler said in a statement Monday, adding that they would “evaluate how to proceed in the coming days” and could even seek relief in an international forum.

On Monday, Stephane Dujarric, the spokesperson for the UN Secretary-General Antonio Guterres called on the Myanmar authorities to reconsider their decision.

“It is unacceptable that these journalists were prosecuted for reporting on major human rights violations against the Rohingya in Rakhine State,” he said, according to Reuters.

White Powder Letters Sent to US, Israeli Embassies in Berlin

Moscow has Noticed US Attempts to Meddle in Russian Election Process