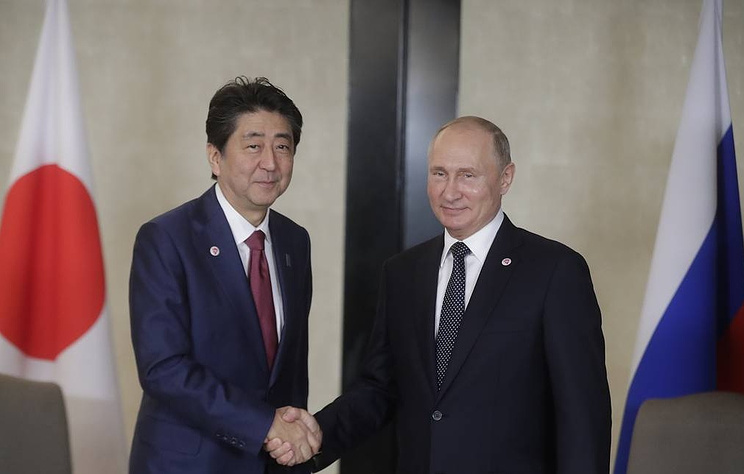 Russian President Vladimir Putin and Japanese Prime Minister Shinzo Abe will meet on June 29 on the sidelines of the G20 summit in Osaka, Russian Foreign Minister Sergey Lavrov said on Friday after talks with his Japanese counterpart Taro Kono.

“We compared notes on issues of developing our relations in all spheres in the framework of preparing for another meeting between Putin and Abe which is scheduled for June 29 on the sidelines of the G20 summit in Osaka,” Lavrov said.

He noted that the foreign and defense ministers of Russia and Japan discussed at their talks on Thursday settlement of conflicts and developing foreign policy cooperation. The G20 summit will be held in Japan’s Osaka on June 28-29.

Tokyo believes that regular meetings between the Japanese and Russian foreign ministers have a positive role in relation to efforts to make a peace treaty, Japanese top diplomat noted.

“Regular meetings between the Japanese and Russian foreign ministers are a great driving force on the way to a peace treaty,” he said. According to Kono, the parties discussed the peace treaty issue, including aspects the two countries view differently.

The Japanese foreign minister also said that in accordance with a bilateral agreement, the parties would refrain from disclosing the details of the peace treaty talks.

Since the mid-20th century, Russia and Japan have been holding consultations in order to clinch a peace treaty as a follow-up to World War II. The Kuril Islands issue remains the sticking point since after WWII the islands were handed over to the Soviet Union while Japan laid claims to the four southern islands. In 1956, the two countries signed a joint declaration on ending the state of war and restoring diplomatic and all other relations, however, a peace treaty has still not been reached. Moscow has stated many times that Russia’s sovereignty over the islands cannot be called into question.

On November 14, 2018, Russian President Vladimir Putin and Japanese Prime Minister Shinzo Abe held a meeting on the sidelines of the ASEAN summit in Singapore and agreed that the two countries would speed up peace treaty talks based on the 1956 declaration. The two countries’ foreign ministers, Sergey Lavrov and Taro Kono, oversee the negotiations conducted by their deputies, Igor Morgulov and Takeo Mori.

The Joint Declaration said that the Soviet government was ready to hand Shikotan Island and a group of small islands over to Japan, adding that Tokyo would get actual control of the islands after a peace treaty was signed. However, after Japan and the United States had signed the Treaty of Mutual Cooperation and Security in 1960, the Soviet Union withdrew its obligation to hand over the islands. A Soviet government’s memorandum dated January 27, 1960, said that those islands would only be handed over to Japan if all foreign troops were pulled out of the country.

Man Who Set Himself on Fire Outside White House Dies