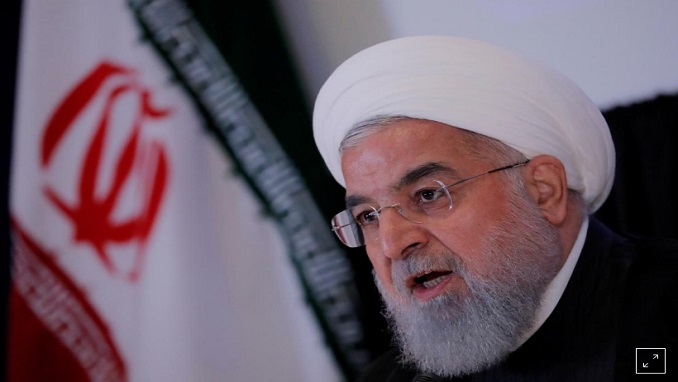 Is this politics or something more?

While speaking at an Islamic unity summit in Tehran, Rouhani called on Muslims worldwide to stand against the U.S. and Israel. An Associated Press reporter describes Rouhani’s unexpected statements toward Israel: “Rouhani said ‘one of the ominous results of World War II was the formation of a cancerous tumor in the region.’ He went on to refer to Israel as a ‘fake regime’ set up by Western countries.”

“Mr. Rohani, who is a relative moderate, rarely takes such confrontational posture towards international players. Iranians are puzzled as to why their president is misplacing his energy and focus on fighting [the] US when they are in such dire economic crisis,” explains Dr. Mike Ansari with Heart4Iran.

“In their Islamic unity summit, Rohani attempted to present a case that Muslim nations can come together to fight Israel and the US. But make no mistake – Iran and Saudi Arabia are political, religious, economic and regional adversaries.”

Ideologically, Iran and Saudi Arabia represent the two main branches of Islam: Shi’ite and Sunni, respectively. However, their differences and long-standing conflict go far beyond religion. Positioned on either side of the Persian Gulf, Iran and Saudi Arabia each want control of the region. Each uses armed conflicts in Syria, Yemen, and Lebanon to try and gain strategic advantage over the other.

“It’s doubtful for Iran and Saudi Arabia to reach an agreement as proposed by Rohani,” Ansari concludes.

What does all of this mean for Christians?

Iran has experienced U.S. sanctions and increasing economic strain over the course of 2018. We’ve discussed the everyday impact of these realities in previous articles, like this and this. It’s getting harder for Iranians to find necessities like medicines, and some are taking extreme measures to leave the country.

“It’s no secret that Mr. Rohani’s presidency has been plagued with internal conflicts between his administration and the hardliners, nation-wide protests, economic sanctions and regional conflicts. Many believe his latest comments are a weak attempt to shift blame onto US,” Ansari says.

Persecution watchdog Open Doors lists Iran at #10 on its World Watch List, a ranking of countries where it’s hardest to be a Christian. Most oppression comes from the Shia Islamic government, and believers face extreme levels of persecution.

Although Iran’s President is making controversial statements on the world stage, “it is unlikely for these political statements to have negative implications for Iranian Christians,” Ansari observes.

“However, Iranian authorities have proven to be unpredictable and impulsive. We are asking for continued prayers for protection of Iranian Christians, and other minorities who are facing systematic persecution across Iran.”

As described here on its website, Heart4Iran functions like a facilitator. It serves as a voice for its partners on the ground in Iran, raising awareness of their work to build the Persian Church. At the same time, Heart4Iran seeks to involve Western believers in that work.

Putin Says Russia and China Working Together to Ditch Dollar