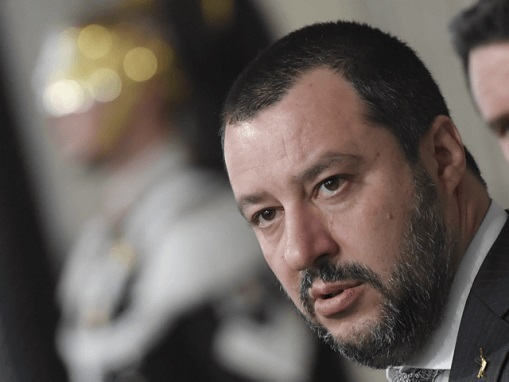 Italy’s Interior Minister Matteo Salvini has blasted French President Emmanuel Macron, calling him a “hypocrite” for turning away migrants while lecturing other nations about open borders.

“We do not take lessons from a hypocrite,” Salvini said Thursday in response a statement by Macron decrying nationalists who “preach hate.”

On Tuesday, Mr. Salvini met with Hungarian Prime Minister Viktor Orbán in Milan after which the two leaders vowed to demolish the current European Union (EU) globalist structure and replace it with a model that respects the national sovereignty of EU countries.

“In Europe, Macron is at the head of the parties that support immigration, on the other side are we ourselves, but we want to stop illegal immigration,” Mr. Orbán declared.

In a Facebook post Thursday, Mr. Salvini said it is time for Mr. Macron to put his money where his mouth is.

“From the beginning of 2017 to the present day, France of the ‘good Macron’ has rejected more than 48,000 immigrants at the borders with Italy, including women and children,” he said. “Would this be the ‘welcoming and supportive’ Europe that Macron and the good people talk about?” he asked.

“Instead of giving lessons to others, I would invite the hypocritical French president to reopen the borders and welcome the thousands of migrants he had promised to take. Italy is no longer the refugee camp of Europe; the haven for traffickers and naifs is finished!”

Mr. Salvini is currently the most trusted politician in Italy, having made good on his promise to rein in illegal immigration.