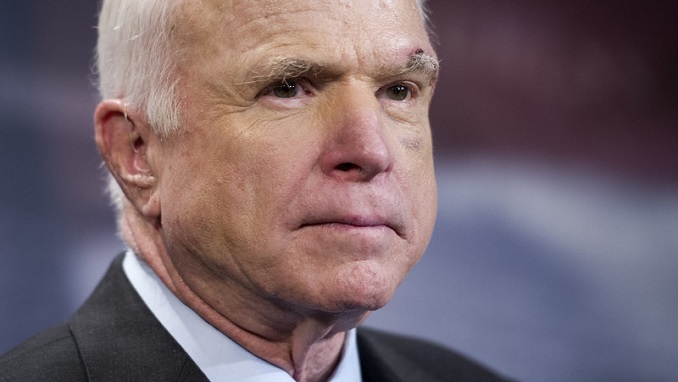 Senator John McCain was paid tribute to at a memorial service in Arizona on Thursday, where fellow lawmakers, friends, and family remembered his devotion to his adopted state and the senator’s willingness to break with his party to defend what he believed were his country’s founding principles.

All those who came to pay their last respects stressed the political values McCain held, drawing a contrast to President Donald Trump who was not invited to the memorial service.

“John understood that America was first and foremost an idea, audacious and risky, organized around not tribe but ideals,” said former Vice President Joseph R. Biden Jr., who spoke with passion and tears in his eyes about his long-time friend.

Grant Woods, McCain’s first congressional chief of staff, made similar comments saying the Arizona senator “would not stand by as people try to trample the Constitution or the Bill of Rights, including the First Amendment.”

However, the hour-and-a-half service also saw a lot of tears and laughter as friends and family recalled events from the senator’s life. McCain’s flag-draped coffin was taken out of the sanctuary by a military honor guard.

The senator’s body lay in state in Arizona’s Capitol Wednesday where Arizonans lined the street leading up the church, many holding small American flags or bearing “McCain” signs reminiscent of his presidential campaign logo.

After Thursday’s service, the coffin was taken to Washington, DC where McCain will lie in state in the Capitol on Friday before a memorial service on Saturday at the National Cathedral. On Sunday, he will be buried near the Naval Academy, in Annapolis.

Tommy Espinoza, a Mexican-American leader, one of many to pay the late senator respect, noted McCain’s respect for all regardless of race or background.

“He understood all of us — whether it was white, black, brown, Asian, to him it didn’t make any difference — what he knew is that we all make America great,” he said.

Salvini: ‘Hypocrite’ Macron Should Either Shut His Mouth or Open His Borders