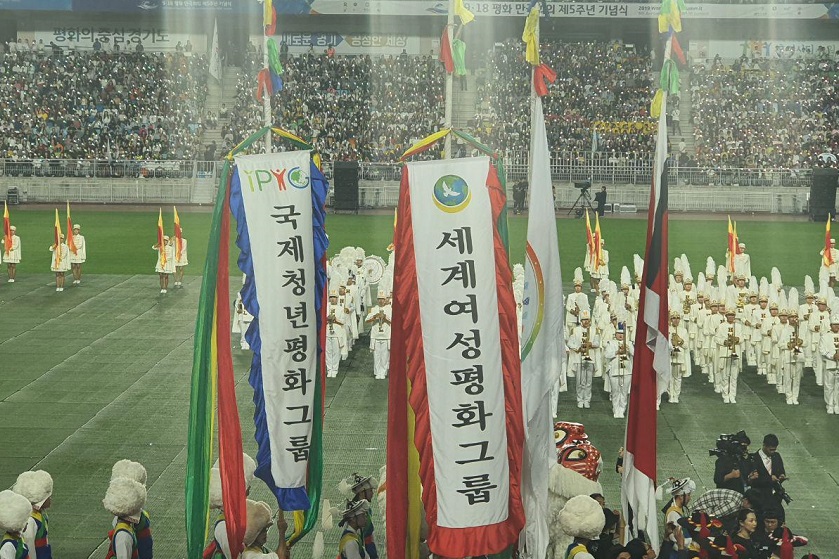 The Peace Festival took place on the 18th of September, 2019 in the Suwon world cup stadium, in Gyeunggi-do, South Korea. About 50,000 people took part in this outdoor World Peace Summit event.

“Encourage your loved ones and your wives and children to participate in the work of eternal peace so that we can work in peace with those who can truly serve the human world rather than power and profit. Is there anything more valuable than this? Isn’t this pure service that will make the world great to leave as an inheritance for future generations?” IWPG’s Hyun-sook Yoon said in her speech.

“Its time for peace to rule the world. Let us connect with one another so that the lifeline of peace does not break, and work with the heart to carry each other’s burden for the future and safety of humanity. Let’s add on to the wisdom that [we] have accumulated, and the professionalism [we] have worked on to complete peace in this age.” she added.

With the aim of establishing the international law of DPCW (Declaration of Peace and Cessation of War), the 5th Anniversary of the September 18th World Peace Summit took place in 145 cities of 110 countries around the world.

This project aims to legislate the DPCW as a legally binding international law.

DPCW contatins 10 articles and 38 clauses which outline the methods for ceasing all of the conflicts and hostilities around the world and bequeathing Peace as our cultural heritage to future generations.

Space Force Formal Launch Pegged Back Due to Cost