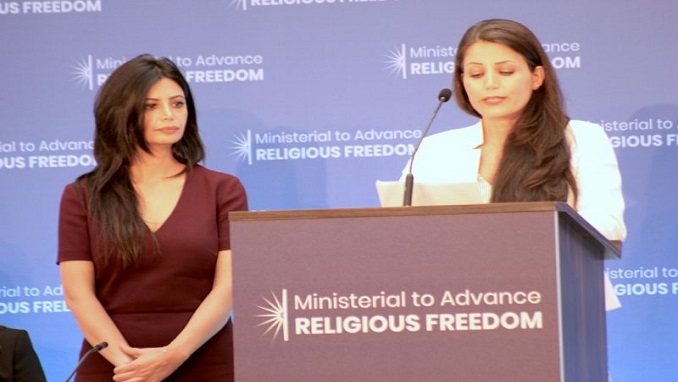 Two Iranian Christians are pleading with the world to hear the cries of the Iranian people as they recounted their own ordeal of being imprisoned for their faith., Christian Post reports. In remarks before hundreds gathered at a Wednesday afternoon plenary session at the State Department for the Ministerial to Advance Religious Freedom, Maryam Rostampour and Marziyeh Amirizadeh explained how Jesus Christ sustained them and miraculously intervened when they were jailed. The women were born into Muslim families who became Christians as young adults; the two friends met in Turkey while studying theology in 2005.

The two women were arrested in 2009 by the Iranian regime because of their Christian faith and spent 259 days in one of the nations most notorious prisons. They were subjected to daily interrogations and mental torture, were said to have committed various offenses — apostasy, blasphemy, promoting Christianity in Iran — and were sentenced to execution by hanging. During their ordeal, Iranian officials also routinely threatened their lives and the lives of their families in order to pressure them to recant their faith, but they refused.

“Since Islam is the only official religion in Iran, government authorities forbid other religious minorities from practicing their faith,” Amirizadeh said, noting that persecution against Christians has been rising in recent years.

Men and women who leave Islam for the Christian faith are deemed “infidels” and “dirty,” she continued, and such individuals often face the death penalty and various kinds of torture. She and Rostampour were mistreated in the prison in which they were jailed, not allowed to use certain facilities within the prison and doctors did not treat them with medication. They were coerced into participating in Islamic prayers and had no access to Bibles. While in prison they also saw prison guards physically abusing and beating others, a source of agony for them.

“The only thing that helped us stand on our faith was our personal relationship with Jesus and the love of God that we have experienced in our lives. We told them many times that Jesus is our Lord and you cannot take Him away from us,” Amirizadeh said.

Rostampour added: “We believe we are alive today because of Jesus’ power and His miracles.”

The Iranian government had to release the friends after significant international pressure from other governments, Christian ministries and advocacy groups. Yet just before they were released the intelligence officers threatened them that they would be watched daily, and told them they could not guarantee their safety, giving them names of pastors who were killed secretly after they were released from prison.

“Some of the threats were that ‘you will die in an accident’ or ‘your house may catch on fire.'”

Rostampour and Amirizadeh were forced to leave Iran in 2010. They recount their harrowing experiences and the numerous other injustices occurring in Iran in a book they co-authored called Captive in Iran: A Remarkable True Story of Hope and Triumph amid the Horror of Tehran’s Brutal Evin Prison.

“Hundreds of Christians have been arrested by Iranian authorities and charged with disrupting national security for being a Christian and participating in home churches, receiving prison sentences of 2 to 10 years,” Rostampour explained Wednesday.

Despite these pressures, Christianity is spreading in Iran, she continued, and the majority of Iranians are tired of their current government as they regard it as corrupt and oppressive.

“Our hope and prayer for our country is that one day Iran will be a free country,” she said to applause, “ruled by a democratic government. “We hope for a day when all religious minorities can meet together in peace without having the fear of getting harassed, arrested, tortured or killed by the government.”

She urged the international community to listen to the voices crying out for freedom in Iran.

Following their remarks, Ambassador-at-Large for Religious Freedom Sam Brownback, who presided over the ministerial, and USAID Administrator Mark Green reiterated the importance of furthering religious freedom around the globe. The first-ever Ministerial to Advance Religious Freedom, hosted last week by Secretary of State Mike Pompeo, was attended by delegates from over 80 countries, including some where there are religious freedom concerns.

Christian Trader Taken to Court Over Handing Out a Tract